Due to some unforeseen schedule mishaps, my PAX experience got downsized to Friday convention time and the Harmonix party on Saturday. I had a lot of different worlds to be in last weekend…

…But even one day at PAX is worth it y’all!

Honestly, I was thrilled to be surrounded by tens of thousands of gamers from all over the country converging to celebrate, learn about, and demo new games from tabletop to console to PC to mobile. I’m a sucker for a nerd gathering.

That said, I have never attended a convention where I felt so aware of being a POC.

And guys, I’ve been to a Supernatural (TV show) con.

PAX was overwhelmingly white and male. Not necessarily in an oppressive way (though I’m aware there was an intentionally triggering event at Saturday’s diversity panel smh) but in a “surrounded by white people playing games featuring white leads that were developed by white people” way. And that was a bit much considering that women and minorities play a good share of the games these days. Even at the Indie Showcase panel, a white male audience member felt he had to call out the fact that it was sobering to be attending the panel where groups that were shut out could shine, but it still ended up consisting and being moderated exclusively by: white males. I know it is reflective of both the industry and the Penny Arcade readership but c’mon son, I was hoping for something more. Lack of diversity in fantasy is always a strange deal, as it’s like saying “Yeah, I can imagine time travel, talking plants, and pink dinosaurs that alternate spitting fire and eggs out of their mouth before I can imagine the human protagonist as anything but white. Sorry not sorry, you’re going to buy it anyways.”

That said, Saturday’s Harmonix party at Hard Rock Cafe was a pleasantly diverse space, and I met up with several PAX POC attendees who were veteran “tan faces in white spaces.” In between sets from the amazeballs Princess Problems and hometown favorites Freezepop, we talked about the importance of carving out a place for ourselves and taking time for personal emotional health. There’s a long way to go before mainstream developers realize their African/Indian/Latino characters do not have to be riding a lion/fighting with yoga (cough*Dhalsim*cough)/fixing the cars. But there are a bunch of us still ready to fight in order to see ourselves de-tropeified in the games we play.

So here are 3 small suggestions (and game examples) about ways to move forward:

1.) Use games to educate about other people’s real world experiences – We Are Chicago

I get it, many life lessons will never be universally experienced. That’s why games that immerse a player in a world other than their own can be not only educational but at times transformative. And while it may seem trope-y on its face, sometimes a well-crafted game can give nuance to a stereotypical storyline. 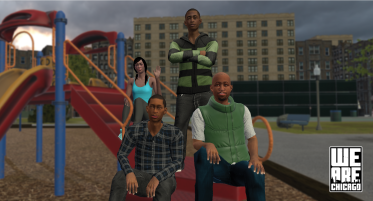 We Are Chicago takes you through a week in the life of Aaron, a black teen who is trying to find out why his friend has stopped coming to school in the midst of navigating the harsh realities of living in a gang-heavy neighborhood in South Side Chicago. Incorporating massive amounts of neighborhood research, this title reminds us that not all games need to be about escapism to be worthy of playing. A key note: The development team is diverse and led by white allies, which goes a way to prove that you do not have to be a member of the ethnic group in order to create a game that shares that life (if you are willing to put in the work.)

2.) Ditch the Western narrative all together – Aurion: Legacy of the Kori-Odan

Playing the majority of third person/side scroller games, you are going to be a white male protagonist saving:

So basically: everyone. But why? Lately the normalization of whiteness as savior or default has seen significant challenges in film, TV, and literature (hooray!) but video games are far behind in creating engaging media that lets a different culture’s story take the lead in a non-exploitive way. Luckily, we now have Aurion on Steam with an English patch for all of us that don’t speak French.

This fantasy RPG is the child of Cameroonian developer Kiro’o Games, which is the first video game studio of Central Africa. I feel Aurion is an excellent sign of things to come. Besides being beautifully drawn, everything from the story to the fighting styles pulls from a rich African cultural viewpoint that’s lacking on the RPG scene. The tale follows Prince Enzo and his new wife Erine as they are kicked out of their homeland on the eve of his coronation by his brother-in-law, who feels the prince is not strong enough to defend the kingdom. The ensuing coup d’état leaves Enzo and Erine fighting their way back to the throne using the force of the Aurion, “a powerful collective energy channeled from his ancestors to smite his foes”. I just…I’m so into this you guys. And it’s PAX 2017 black love cosplay fodder for real.

And lastly (but easiest to start doing)

So you have a fantasy game with the classic species represented: elves, orcs, mages, and of course a few humans sprinkled in here and there. How about making some of those humans phenotypically Black/Chinese/Latino? It may help if you have an immensely talented artist like Eric Huang on your team, hand animating your masterpiece. 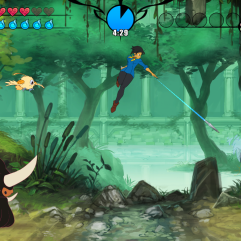 Full disclosure, I passed the Battle Chef table a few times before playing it. My hopeful-but-ultimately-boring experiences with Cooking Mama made me wary, but I was pleasantly surprised to find a fun side scroller/puzzle game that I am anxiously waiting to be released. On the other end of the representation spectrum, I love that this game uses a POC lead but in an organic way where her ethnicity is something that doesn’t affect gameplay, nor is it the singular point of the story. After challenging fellow chefs to a cooking duel, main character Mina hunts down ingredients in the field with a combo of physical and magical attacks. Back in the kitchen items are combined puzzle style with extra points for creativity and playing to judges’ taste. In briefly chatting with Eric I found that he intentionally included touches of cultural elements (the first dish you make is the Sichuan classic Mapo Tofu) and multiple races. All the claps for Trinket Studios!

So long for now, PAX EAST. Here’s to hoping next year that princess is actually a self-rescuing Latina who built her own castle non-ironically.

I'm clever & civically engaged & charming on the outside, but inside I'm stressing about how I really feel like I maybe missed a chest in level 32, now I won't get the special end video & did I ask them to pull Black Panther this month...I'm sorry I have to go right now...