A hello, and a goodbye

What a weird day to start blogging about blerds, games, fantasy, and comics. I’ve been putting off this first post for weeks (fine, a year if you’re counting from when I got this domain) but the perfect alignment of PAX East with the Game of Thrones Season 6 premiere has created a nerd culture deadline. I was going to find a way to sidestep this again, but an interpretation of what the Purple One meant for blerds gave me what I needed to go public today. Join me as I explain:

This morning I had a handwritten intro piece sitting in my notebook. It just needed to be typed up and sprinkled with pictures and links before taking this blog live. Energized, I jumped between editing passages, grabbing some of my favorite nerd pics, and finalizing tomorrow’s schedule in the PAX mobile app. It was a pretty good start for a Thursday. 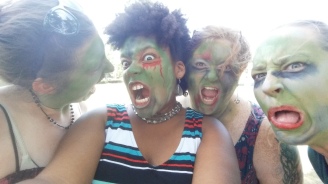 Around 1:30PM, the world turned upside down. It started with a few people posting the TMZ link and asking if it was a hoax. Then other news outlets began corroborating the story and suddenly all my social media feeds went Prince. Teary emoticons, ticket stub Instagrams, YouTube videos of choice 80s performances with the Revolution popped up everywhere as the world mourned one of the greatest musicians to grace the planet. Now how was I supposed to put up my cheeky little post when my heart felt colder than the waters of Lake Minnetonka?

Well, thank God for Michelle Garcia, whose Vox piece Prince gave black kids permission to be weirdos said everything about why this is still a good day to start pouring out my blerdy little heart. Prince was a diminutive deep-voiced sensual dynamo who never turned his back on his weirdness. He owned it and refused to be forced into a constricting mold of what the world felt a Black man should be, even when it was him against the industry/world/his own name. Long before Donald Glover, Kanye West, Tyler the Creator,  etc. made different cool, there was a 5’2 black guitarist from the Midwest ready to melt your face off with guitar licks right before serenading your lady’s pants off her legs.

This blog is going to be a place where you’ll hear me get excited about the things I love (comics, fantasy shows, blerd cosplay, diversity in media, etc.) without a care in the world about how it comes off. I am unapologetically blerdy in my own way; from my extra life coffee mugs to my Janelle Monae running list, from my afropunk hairstyles to my squealing joy when a black person actually has lines on Supernatural [and isn’t dead within the first 15 minutes]. And like other short-but-sweet pioneers of alternative black lifestyles before me, I want to invite you to my world.

I'm clever & civically engaged & charming on the outside, but inside I'm stressing about how I really feel like I maybe missed a chest in level 32, now I won't get the special end video & did I ask them to pull Black Panther this month...I'm sorry I have to go right now...